Some time back, I followed Tim Brister’s Partnering to Remember challenge to memorize the book of Philippians. We took sixteen weeks and memorized the entire book of Philippians, as it was broken into segments each week. That was an amazing experience for me, and I’ve intended to try on my own to memorize another book of the Bible sometime. There are significant benefits to memorizing large passages of scripture.

One benefit is that it encouraged me to really think for a long time on the book of Philippians, in a different way than if I merely read it through a few times. I spent sixteen weeks laboring over hiding those words in my heart and thinking about what they said and what they meant, and that was very, very good for me. Time I might have wasted on mindless things like Facebook games or such was instead devoted to working on memorizing scripture. I had a little notebook that I carried around with me for those sixteen weeks and I referred to it periodically during the day to work on each week's passage, while reviewing what I’d already learned. I even carried that notebook with me to jury duty that winter to study on breaks.

Another benefit is that I found myself applying things I was pondering and learning and thinking on as situations arose, and I still do. It’s amazing how often what I was memorizing springs to mind even now when it is applicable to something I’m walking through. When you spend time in God’s word, your thinking begins to line up with it, it changes you, and you begin to think biblically, and that is an awesome thing.

Something else I found as I worked through Philippians was that those ‘coffee cup’ verses we all know and love and spout off kind of flippantly often have a much deeper, richer and even vastly different meaning when we read and learn them in context. I can no longer read a verse on a coffee cup or in a status update or on a poster without needing to know the context and actual meaning of the verse. SO many of our pet favorite verses that we flippantly quote often do not mean what we think they mean and should not be used how we use them much of the time. Learning a long passage helps you to understand that vital truth, and encourages you to read more carefully when you read other passages. (As an aside, take Psalm 46:10, for example. It does NOT mean what most people think it means when they quote it, very often. Read that whole Psalm prayerfully and thoughtfully and think about it. That is a verse that I often see taken out of context and it frustrates me a lot.)

So, all that being said, I’m getting ready to start another memory project. I’ve kind of hesitated to do that because I’m scared I’ll forget Philippians after working so hard on it. Silly, I know. Anyway, I’m planning to spend this week reviewing Philippians, and then next week I want to start memorizing Colossians. I have wanted to memorize Colossians ever since I attended a Bible study at my church in South Carolina where our pastor’s wife taught on Colossians and encouraged us ladies to memorize it. She was a big proponent of scripture memory. I didn’t take up the challenge then, but I’ve always wanted to.

So, I’ve spent the afternoon today trying to figure out how to format a table to make nice little memory pages like I had for Philippians for my notebook. Thanks to my ever-helpful teenage son, I have spent the afternoon typing Colossians into the table he helped me design. I’ll spend this week proof-reading it, and I hope it will fit my little notebook, and I hope to start next Sunday.

I’ll be using the ESV since that’s what I use these days, and I’ve broken it up into 16 weeks.

Here’s the method I used last time, and I found it very helpful:

Borrowing from the Partnering to Remember project, I use a little 5x7 size notebook like this: 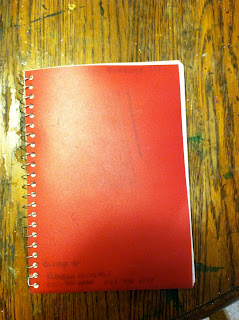 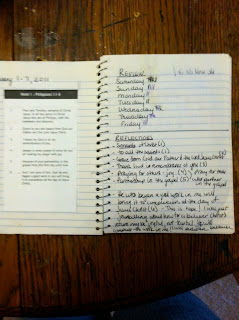 This method of scripture memory was very meaningful to me and I’m looking forward to starting a new project.
Anyone want to join me in memorizing Colossians?

Posted by Rebekah at 5:11 PM No comments:

Rebekah
I am a transplanted Florida native seeking to bloom where I'm planted now - due to my husband's career, we move fairly often - makes for an interesting life. I'm a stay-at-home mother of 3, with a quiet place in my heart remembering our 4 little ones in Heaven due to miscarriage. I desire to honor my Lord Jesus Christ in all I do as I grow in His grace. I tend to have a fairly serious dispostion, but I do love to laugh. My blog analogy: Sweet tea because life is so sweet in the Lord, and lemon because we live in a fallen world with some bitter things, and as we learn to glorify Him even in the trials, He grants us the faith to persevere and mature into something beautiful for His glory. Thanks for joining me on the front porch. The tea is cold and sweet, so feel free to pull up a rocking chair, visit awhile and chat.

A Little More About Me

Some of My Favorite Blogs