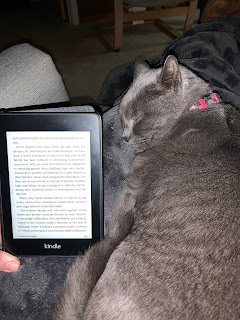 For the past several years, I've made it a habit to share my list of books I read for the year.  Once again, I'll add the caveat that just because it's on this list, doesn't necessarily mean I recommend it, just that I read it. For many I jotted down some impressions, but not for all. Now that we have only five days left in the year, and the next book I'm about to start is a long one, I'm pretty sure I won't finish anymore for this year's list. So, if by some chance I do finish it, I'll add it to this post, otherwise, here is the list for 2020, and I say, welcome to 2021…...

And this is Jags, who was a fairly constant reading buddy this year.  There is something so comforting about a cat who snuggles in your lap while you read a good book.

Rebekah
I am a transplanted Florida native seeking to bloom where I'm planted now - due to my husband's career, we move fairly often - makes for an interesting life. I'm a stay-at-home mother of 3, with a quiet place in my heart remembering our 4 little ones in Heaven due to miscarriage. I desire to honor my Lord Jesus Christ in all I do as I grow in His grace. I tend to have a fairly serious dispostion, but I do love to laugh. My blog analogy: Sweet tea because life is so sweet in the Lord, and lemon because we live in a fallen world with some bitter things, and as we learn to glorify Him even in the trials, He grants us the faith to persevere and mature into something beautiful for His glory. Thanks for joining me on the front porch. The tea is cold and sweet, so feel free to pull up a rocking chair, visit awhile and chat.

A Little More About Me

Some of My Favorite Blogs